THE DIFFERENCE BETWEEN A NICE MAN A GOOD MAN

Swami Amritageetananda Puri (a senior disciple of Amma) addresses two related questions. These relate to the two guardian statues at the entrance of the Kali Temple in Amritapuri. His answer gives us good insight into the ways Amma molds her disciples.

“If Amma is Compassion Incarnate, why are there two snarling lions in front of the Ashram ready to pounce on us?”

“Why is the chariot with Sri Krishna and Arjuna in a battle scene and not Geetha Upadesha?” 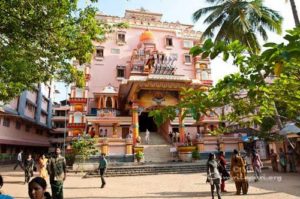 Above the Kali Temple entrance are the 5 horses that pull the chariot of Arjuna and Lord Krishna.

In other words, why is the chariot depicted in the battle from the Mahabharatha? The person feels it should be depicted from the Bhagavad Geetha or Geetha Upadesha. This would be a peaceful scene with Arjuna listening to Lord Krishna’s advice instead of drawing his bow. The Bhagavad Geetha is the divine poem that shows the way for an average person to achieve Realization or union with the Self. It is a kernel of great wisdom lying in the heart of the epic scripture; the Mahabharatha. The setting is a great war between the unrighteous Kaurava clan and the righteous Pandava brothers led by Lord Krishna. At the moment the battle is to start, Prince Arjuna of the Pandavas, loses heart. This is the interlude where the Geetha begins. [su_highlight background=”#e8e8e8″ color=”#212121″]Lord Krishna gives Arjuna the highest spiritual wisdom[/su_highlight] to help him fulfill his duties as a warrior and defender of his people.

Both the lions and the Mahabharata chariot battle scene represent and symbolize “Aggressive Goodness”. A “Good” man goes to any extent to restore or preserve Dharma.

The Lions are Durga Vahanas, (the vehicles or mounts of the Goddess Durga). The Universal Mother rides them as she travels the Universe.

The Lion is an “Outstanding Personality”. A male lion can be easily spotted among a group of lionesses. The bull and the eagle are also outstanding amongst their own species. Observe the Deepasthambams (the great oil lamps) at the temple. The entire oil lamp sits on top of a tortoise. The top of the oil lamp is the mount of the temple deity. In Devi temples it is a lion, in Shiva temples it is Nandi the bull. And in Vishnu temples it is the eagle Garuda.

All Aishwaryam (prosperity and glory) comes to a person of self-control. He becomes an outstanding person.

The symbolic meaning is this; a devotee should learn to withdraw his five senses. This means self-control, like a tortoise which can withdraw its head and four limbs into itself. All Aishwaryam (prosperity and glory) comes to a person of self-control. He becomes an outstanding person.

The lions in front of our Ashram are ready to pounce on us. They want to warn and remind us of something: “Whoever you are, remember that there is Only One Power here – the power of the Universal Mother. All other powers are insignificant and temporary in the presence of the Divine Mother’s power!”

Years back, the previous President of India Abdul Kalam came to inaugurate the “Amrita Sethu” bridge. He stopped his elite security guards outside our Ashram and told them “I don’t need you inside. I am going to see the Divine Mother!”

“I don’t need you inside. I am going to see the Divine Mother!”

What a wonderful example he had set! Let us follow his example.

In the olden days, Amma always used to say, “Children, spiritual aspirants should be like simha kuttikal (lion cubs).”

Simha is the opposite of Himsa or violence. [su_highlight background=”#fbf4ff” color=”#212121″](Ahimsa or nonviolence is one of the tenets of right living).[/su_highlight] A lion is non-violent by nature. It is also fearless, courageous, and dignified. It can drive away a herd of elephants and only attacks when provoked. The lion kills other animals only for food. It eats a little, and leaves the rest for the other smaller animals. 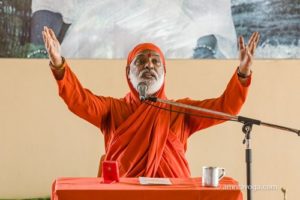 The lion has a rare quality. It walks for a while, stops, turns around and looks back. It walks again and does the same thing. This is ‘Simha Avalokana Nyaya.’ in Samskritam (Sanskrit). Sadhaks (spiritual aspirants) also move like this. We stop and look behind, to look at ourselves and to fix our mistakes. This way we improve ourselves and move forward.

Guru Nanak was a great leader and guru in northwest India in the 16th century. He inspired the Hindus to defend their country from invaders. He made them spiritual warriors and named them Simha – lions – Ranjith Simha Tej, Bahadur Simha. The English could not pronounce the word “Simha” and changed it to “Singh”. History has taught how they bravely sacrificed their lives for the sake of freedom. The great freedom fighter Lala Lajpath Rai was also called “Lion of Punjab”.

The Purpose of a Gurukulam

Gurukulam comes from the word guru (spiritual teacher) and kula (extended family). It is the institution of the guru-shishya, teacher and disciple relationship. They live together and the student learns from the guru in day-to day activities. Amritapuri is not just a place where Amma lives. It is a gurukulam where disciples follow Amma’s teachings as their guru. As Swamiji says:

“There is a huge difference between a person educated by a university and the integrated person groomed by a Gurukulam. University education is only skin deep. Graduates will gain communication skills to become good salesmen and effective managers. But in really trying situations, they buckle under pressure, fall apart and collapse!”

A gurukulam, however, can produce great spiritual leaders like Swami Vivekananda. He was molded by his spiritual Guru Sri Ramakrishna Paramahamsa. Swami Vivekananda inspired thousands of people as he gave spiritual lectures around the world in the early 20th century. This is the power of the guru lineage.

The difference between “Nice People” and “Good People” has to be carefully understood. Most universities develop “Nice people”. The Gurukulam alone can develop “Good People”.

Under Amma’s guidance, Education for Life is a central feature of all Amrita Educational Institutions.

The very word “persona” means a mask. The personality is not the real person. The Sadguru first demolishes the existing “person”- the Ego with its powerful individual likes and dislikes. The guru then creates or brings out the new real person, dharmic to the core.

The Amrita Setu walking bridge from Amritapuri ashram to the campus of Amrita University.

(A Dharmic person is one who invariably follows the path of dharma; action according to Divine laws. Lord Krishna is a pure example of someone who follows the laws of dharma. Such a person always performs the right action at all times.)

With the Strength of a Lion and a Heart of Gold

Swami Vivekananda called his saddhaks “Young men and women with muscles of a lion and nerves of steel”. But Amma’s compassion goes further. She also molds Hearts of Gold for her devotees! The Good men and women that a Sadguru like AMMA creates alone can lead the world. They are persons of integrity and character, wedded to Dharmic principles. The lion symbolizes “Aggressive Goodness,” ready to go to any extent, and to use even force if necessary, for the cause of Dharma.

The chariot scene on the Kali Temple shows Arjuna, the “perfect man of action”. He is the ideal disciple, and Sri Krishna is the ideal guru. There is perfection in Action only when the Attitude behind the Action is perfect. [su_highlight background=”#fbf4ff” color=”#212121″]This is only possible when there are Sadgurus like Sri Krishna and our Amma to guide us.[/su_highlight] Bhagavan Krishna removed Arjuna’s confusion which was created by attachment and ego. Arjuna now goes to battle with the attitude of “I am only an instrument in the hands of the Lord”. His actions become actions for Loka Kalyanam – for the good of the world.

“Niyatham kuru karma thvam” – O Arjuna, perform actions which are allotted to you as your duties. You have no choice. I have already taught you the right attitude. Performing them, you become purified and free from bondage.

Duties can be unpleasant. But Amma teaches us to perform them with the right attitude; as offerings to her. She has taught us to convert every action into worship.

(This is the path of karma yoga, the yoga of action.)

We have many historical examples of great karma yogis. They performed their duties with devotion. Dharmavyaada was a butcher. Kabir was a weaver. Tukaram and Guru Nanak were farmers. Kumbha Gora was a potter. Shokka Mela was a mason. [su_highlight background=”#e8e8e8″ color=”#212121″]But all of them performed their respective duties and achieved spiritual liberation.[/su_highlight]

“With the Divine Name on your lips and the Divine form in your hearts, fight against Adharma – O Arjuna”.

This is Bhagavan Krishna’s Divine Teaching to Arjuna – His Divine message to mankind. Meekly watching Adharma (un-righteousness), or doing nothing to oppose it is equal to supporting Adharma.

We may not be a Lord Hanuman, an Arjuna or a Bhima (another great warrior from the Mahabharath). But we can at least be like Jatayu. He also got liberation at the hands of Sri Rama.

(This is a story from another epic scripture; the Ramayana. Jatayu was a holy eagle being, a Garuda. He was true to Lord Rama. He saw the demon-king Ravana stealing Sri Rama’s wife Sita. Although he was old, Jatayu bravely fought to stop him. Ravana severed his wings and he died. At his death he was granted liberation by Sri Rama.)

(The vanaras were godly beings who served Sri Rama in battle against the demon-king Ravana. Lord Hanuman was the most famous devotee of Sri Rama. The Pandavas were the righteous brothers who fought adharma in the form of the Kauravas Clan. Arjuna was one of the Pandavas.)

The same Divine power which manifested as Sri Rama in Ayodhya (the seat of Sri Rama’s kingdom), and again manifested in Gokul as Krishna has now manifested in Amritapuri as our guru Amma.

Living together in Amritapuri, let us remember Her Infinite Divine power and cast aside our little personalities. Amma makes us lions-ready to tear Adharma and its advocates apart – Let us all roar together – “Maha Kali Ki Jai!” 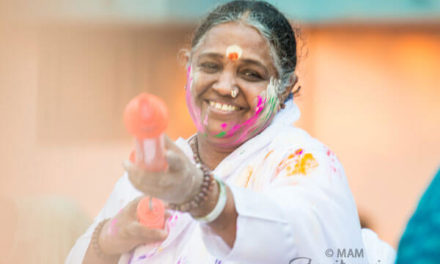 The Legends of Holi Teach Us to Shed Our Ego

Why Morals Matter In Our Practice