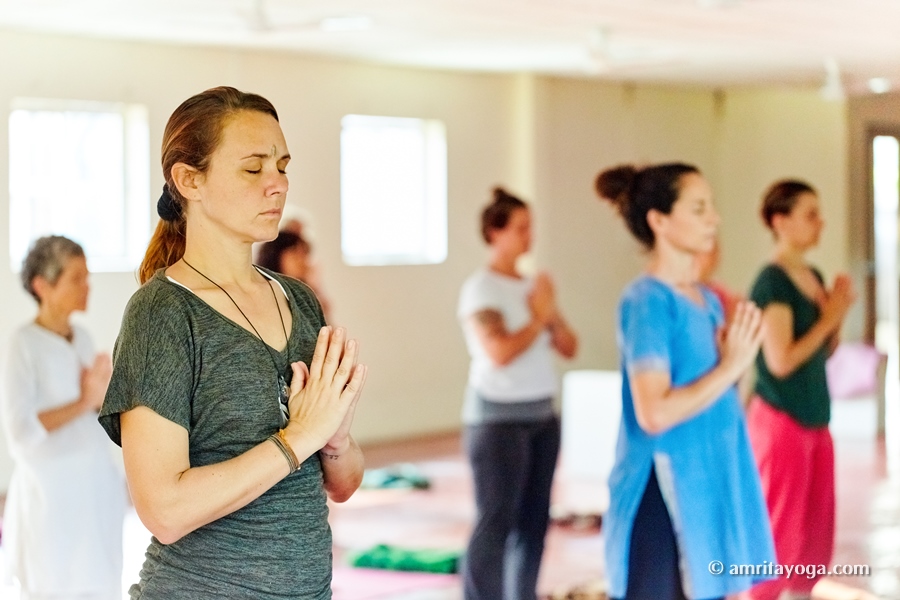 The Bliss Of The Roaring Silence 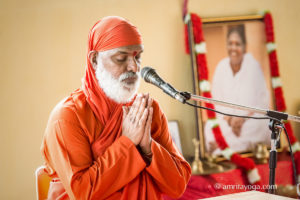 We can experience this unusual phenomenon only in the Divine Presence of a Sadguru like Amma. In general people become uneasy and restless when they are subjected to silence. Silence can be frightening or gloomy. In my younger days, sometimes when I walked back home from a cinema theatre after a second show at 12 am, I used to feel very uneasy and used to sing loudly till I reached home. Generally and unfortunately, silence, especially in the night is associated with the presence and roaming around of ghosts, yakshis, bhoothas, thus were we taught by our elders. Again, when we go to graveyards or cemeteries also, there is a silence which is extremely gloomy. 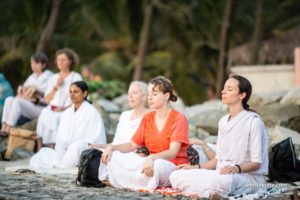 But we can experience a richness and extreme joyfulness in Silence during Amma’s meditation sessions. I heard this quote “Roaring Silence” from our Acharyas (teachers) when we were studying Vedantha. At that time, I had only a vague understanding of what “Roaring Silence” means. It was on a Tuesday around 11 am at Amritapuri that I suddenly understood what Roaring Silence means. Amma had come to Darshan hall and we were being guided into deep meditation. Three loud chantings of OM, and then deep silence. It is not the “pin-drop silence” which our school teachers used to demand from us when we were students. Nor is it is the “Dead Silence” which we very often hear. 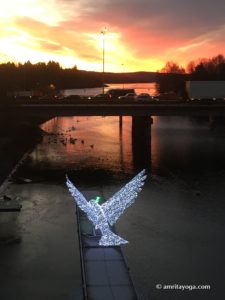 This is a new silence which is very deep, rich, profound, extremely joyful, a sunshine all around us and illumining us to the core of our Being within. It is a silence which every one of us want to continue and from which none of us want to come out. A group of people coming out of a crematorium after a cremation – they are silent. A group of people coming out of a meditation hall – they too are silent. From outside, they both look alike – silent. But the cremation group is restless or sad and gloomy inside – the meditation group is peaceful within. In the crematorium silence, there is emptiness but in the Meditation hall silence, there is fullness. The Tsunami flood was destructive. But in Amma’s meditation we get drowned in the flood of Silence only to become Immortal because it is the flood of Amritam – Nectar.

Silence is ONE, into which all human minds dissolve like drops of water falling into and merging with the ocean.

Our great Spiritual Masters have discovered and experienced the power of Divine Sound vibrations which gradually takes us into this deep Silence. It is like a mother putting her baby to sleep. First she sings in a loud voice to get the baby’s attention. The baby listens and responds. Slowly the mother reduces the volume of her lullaby, then slowly she murmers mmmm…….mmmm…….mmmm……..then silence…..her baby has gone into sleep. So too, our mind is like a baby- playful, restless. Our Masters teach us loud chanting first – bajans and keerthans set to music, Archana then chanting our mantra in a whisper……then mental chanting. Slowly the chanting dissolves into Deep Silence. 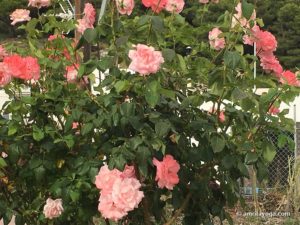 The two most important sounds which can take us into deepest silence and into the very core of our being is the Pranava mantra OM, and the mantra which our Sadguru Amma has given us. Silence takes us into our real nature of Pure Consciousness. From Silence, all sounds emerge, and into that same silence, all sounds emerge. Hindu chantings may be different from Muslim chantings, and Christian chantings. But they all emerge and dissolve into the same silence. Can we say that Hindu chantings emerge from Hindu silence and merge back into Hindu silence?

Silence is ONE, into which all human minds dissolve like drops of water falling into and merging with the ocean. Collective chantings of the Divine Names, Hymns and Bhajans create a swift flowing river of powerful sound vibrations in which we bathe, get totally purified and finally merge into the Ocean of Silence.

But in Amma’s meditation we get drowned in the flood of Silence only to become Immortal because it is the flood of Amritam – Nectar. 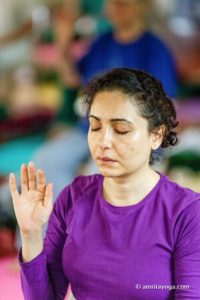 In Kambam and Erode, both in Tamil Nadu during Amma’s program this year, the vast ground was filled with ten thousand villagers and during Amma’s meditation session, the ten thousand devotees were in “Pin-drop silence”. The Infinite power of a Sadguru like Amma alone can take such a vast crowd into deep silence. Sitting in their midst, when one becomes more and more involved, one feels the “Roaring Silence”. For the first time we feel that silence is not emptiness or an absence or a non existence.

Sound is temporary, it is born and it dies. Silence is always there as the substratum of all sound. That is why Great Men of Realization, Avadhoothas get away from the “din and roar” of the so called civilization, they go to lonely places and continuously enjoy the deep silence within themselves. Amma Herself was like that in Her earlier days, we all know. But to take Her Beloved children into that Blissful Silence, She has come down into this din and roar of so called modern cities. 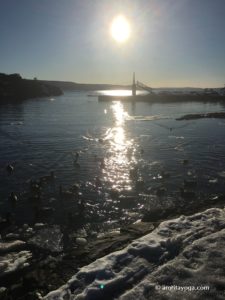 Our Acharyas repeatedly advises us that nothing external can take away our peace and joy if our thoughts are quietened and our mind made to go deep into its real nature. The difference between Amma and us is that we are only tumblers or small vessels of water – we can be easily shaken! Amma is like the Ocean – only its surface is turbulent, its depth is always calm. Only the calm mind can know the truth. A verse in the Dakshinamurthy Stotram says,

“The scene is a banyan or peepal tree under which Lord Shiva sits in the form of Dakshinamurthy, the Universal Teacher who has a youthful form which denotes His Changeless Nature. Sitting down facing Him are His disciples who are old men symbolising maturity owing to countless years of deep penance. The Guru indicates the Truth by a Silent Mudra (gesture) and the disciples’ ignorance and doubts are fully dispelled.”

We will be surprised to know that in the Bhagavad Gita Chapter 17 Bhagavan Krishna is speaking about different levels of austerities namely the body, speech and the mind, Maunam or Observance of Silence comes under mental tapas and speech tapas. Real Maunam is controlling speech from where it manifests – the thought level. This truth is not known to most Sadhaks who practise Maunam or Silence. They may not speak but will convey their thoughts to others through their actions and face expressions. This is not real Maunam. Real Maunam is not having any contact with the external world around us and our mind absorbed in Amma.

The greatest Blessing which we Amma’s children have is that the Guru in Amma makes us constantly aware of disturbances which arise in our mind and helps us to gradually bring the restless mind to permanent quietude.

There are sounds which distracts us and take us away from our inner peace and joy and there are sound which can take us gradually into deep silence. Let us wisely choose what takes us closer to real peace and joy, let the youngsters discriminate and know the difference between cheap sensations and deep bliss, chant with devotion and glide into or merge into their own nature of Everlasting Happiness –

Amma is waiting at our own door to take us inside…

(As always, thoughtful comments are invited and appreciated. Share your reflections with us! See below to leave a comment.)

Article Name
The Bliss of Roaring Silence
Description
This is a new silence which is very deep, rich, profound, extremely joyful, a sunshine all around us and illumining us to the core of our Being within.
Author
Swami Amritageetananda Puri
Publisher Name
Amrita Yoga Amritapuri
Publisher Logo 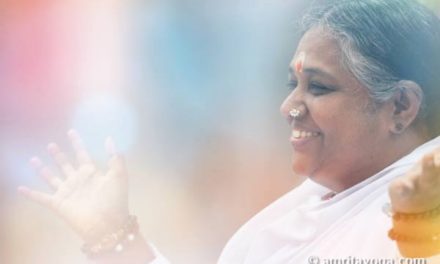 The Ancient Sustains the Modern 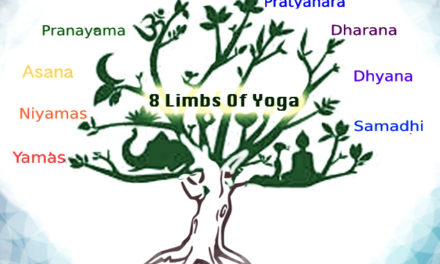 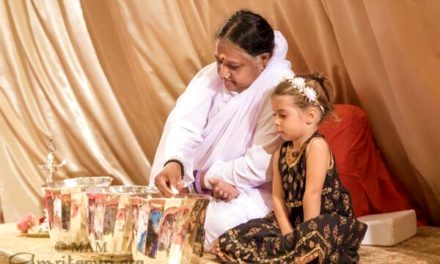 Universal Motherhood: What it Means to Me Now! 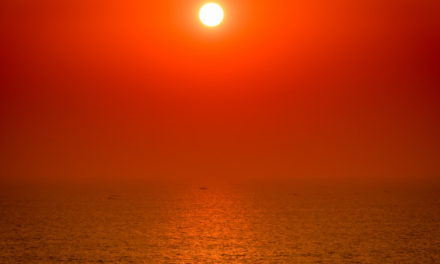