Amritapuri, The Abode of Amma 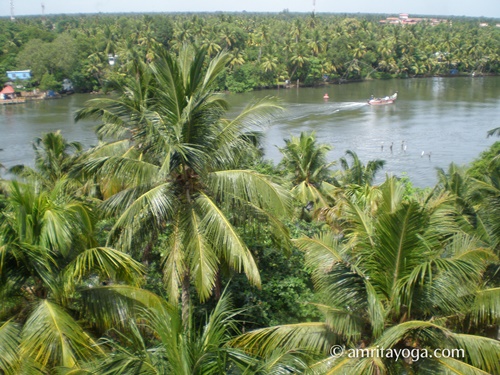 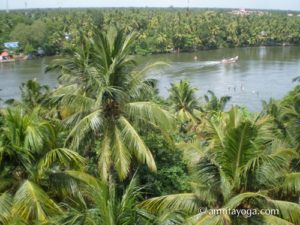 Picture of the Kali Temple at Amritapuri Ashram.

Amritapuri: the Abode of Amrita Yoga

Visitors are surprised when they first arrive in Amritapuri. How could an ashram grow in narrow land cradled between the backwaters and the Arabian Sea? How could this remote fishing village become the center of a spiritual revolution?

Amritapuri translates as ‘Immortal Abode’. It is the spiritual home for Amma’s monastic disciples and devotees. The residents have dedicated their lives to attaining the goal of Self-realization. They live with Amma and imbibe her teachings. They practice meditation and yoga. The ashram residents participate in selfless service. Volunteers and devotees keep the ashram running.

The residents have dedicated their lives to attaining the goal of Self-realization. 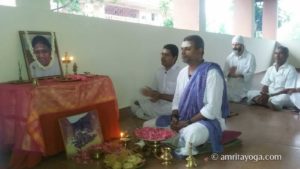 Inauguration of the Amrita Yoga retreat space at Amritapuri ashram.

It was first taught to Amrita University students. Later, Amrita Vidyalayam schools in India began getting Amrita Yoga classes. The unique teaching methodology of Amrita Yoga was formalized in 2007. Amrita Yoga has expanded and is now offered to all age groups. There are classes for Indians and Internationals. There are special classes for children, for women and for the elderly. Amrita Yoga is also taught at our centers worldwide.

The inspiration for all the activity at Amritapuri is and always has been Amma. Thousands come to the ashram every day for Her darshan. Amma sees each and every person, no matter how long it takes, giving each person exactly what they need. The ashram is like a school where all kinds of people come to study the science of life.

“When the deep, spiritual yearning of the disciple basks in the effulgence of the Guru’s grace, an ashram is born. There one grows in peace and harmony.” – Amma

History of the Ashram 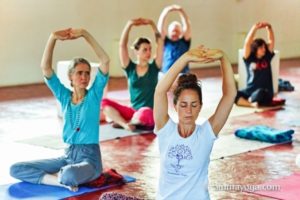 Flourishing of an Ashram and the Kalari

In the beginning, the ashram was a simple family house. Amma had a small hut built next to her parents’ house, which doubled as a kitchen. Amma and the first female disciples lived there. The handful of brahmacharis slept on the sand under the stars.

Amma’s first three disciples asked Amma’s father if they could live with them. This was the beginning of the ashram. He gave them a space on the backwaters near the family place of worship. Using mud and sand as landfill, they reclaimed the land, and built a small palm leaf hut. They later added some more huts for the brahmacharis. They constructed a humble room for Amma where she still stays today.

Amma’s first three disciples asked Amma’s father if they could live with them. This was the beginning of the ashram.

Amma’s father became anxious for Her safety during darshans. He made space for Amma next to the family’s cowshed. She would enter her Krishna bhavas there. She took the mood and form of Lord Krishna in this safe place. Amma’s father allowed it to be converted into a small temple. It is still called the old Krishna temple or Kalari. You can visit the temple today and attend the various puja ceremonies there.

As the masses of devotees grew, it became necessary to construct a larger darshan hall. The beautiful Kali Temple and the main shrine were built from 1988. It was the first large cement structure and it took five years to finish. 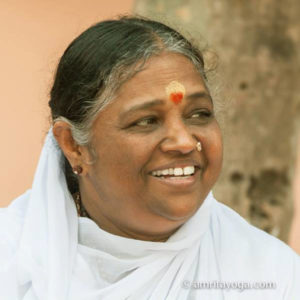 Amma, the founder and creator of Amrita Yoga.

In those days, all the disciples helped with the construction, especially the concrete work. Amma would often lead the work shifts. Above the central entrance stands a majestic statue of Lord Krishna driving the chariot of Arjuna. It is a scene from the Bhagavad Gita. Lord Krishna gives spiritual instructions to Arjuna at the onset of the Mahabharat war. Amma dedicated The temple to Goddess Kali; the destroyer of negative tendencies. Amma gave instructions for the Kali idol to be crafted in Calcutta. The same family crafted the original statue of Ma Kali that Sri Ramakrishna worshipped.

Amma dedicated The temple to Goddess Kali; the destroyer of negative tendencies.

The Kali Temple soon became too small for the growing crowds. To solve this problem, an enormous hall was erected behind the temple in early 2000. To date, it is the largest such hall in Southern India. It covers an area of 30,000 sq. feet. It was designed so that no pillars block anyone’s view of Amma. Amma sings bhajana and holds darshan here unless she is on tour. Part of it also serves as a large dining hall.

Over the years, Amritapuri has evolved to accommodate people from all over the world. Families, students, the elderly and even small babies live in Amritapuri today.

Today, Amritapuri is a city with towering buildings of flats for householders and visitors. There are hostels for students who study at Amrita University. There are many big dining halls. Several buildings hold offices, printing shops, carpentry etc. There is also a hospital.

Over the years, Amritapuri has evolved to accommodate people from all over the world. 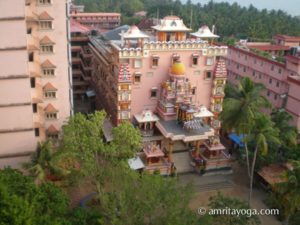 Picture of the Kali Temple at Amritapuri Ashram.

In 2014 Amritapuri inaugurated a beautiful yoga shala to conduct Amrita Yoga and IAM retreats. It is a rooftop space open to the breeze from the Arabian Sea. Yoga classes are often accompanied by a choir of tropical birdsong. It is an inspiring space for Amrita Yoga Sadhana Retreats.

No matter how much it grows, the ashram will always be filled with Amma’s presence. And it is still run according to the holy traditions of ancient India. All the residents and visitors attend to the ashram work themselves. Amma’s many devotes look upon Amritapuri as their spiritual home. It is a fertile field where we can cultivate abundant spiritual qualities. It is also a place where Amma’s grace can help us reap the fruit of God-realization.

No matter how much it grows, the ashram will always be filled with Amma’s presence. 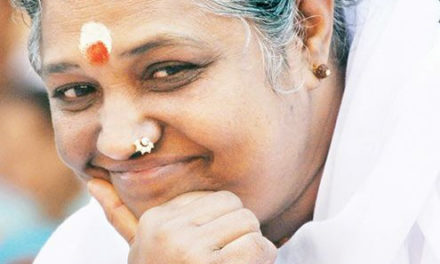 Practicing Yoga in the Presence of a Living Master

Facilities in and around Amritapuri 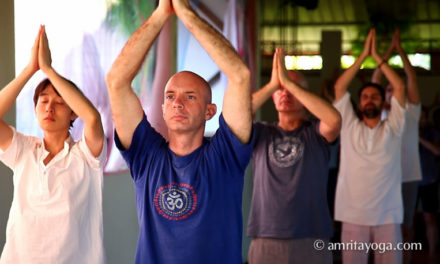